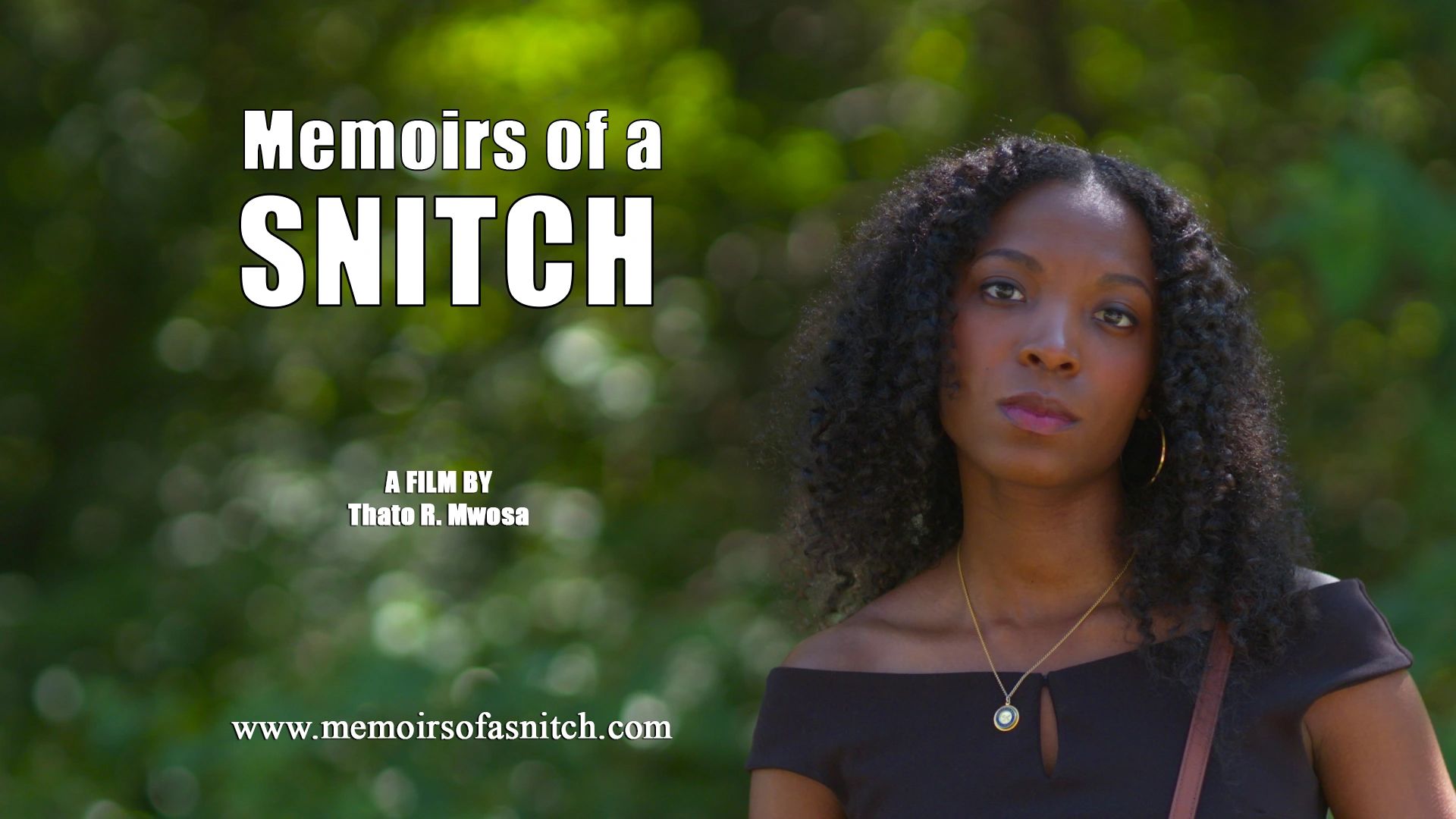 "Sometimes doing the right thing may just be the wrong thing."

"Sometimes doing the right thing may just be the wrong thing."

we need your support

Your support and contributions will enable us to meet our goals and finish the film. Your generous donation will fund our post-production work.

Memoirs of a Snitch is a Coming-of-Age story of a girl and her friends who are forced to grow up and make tough decisions. Aisha Johnson, an astute and bright student, is one of the finalists for a coveted scholarship. One day after Aisha does the right thing, her life spirals out of control and her once-promising future is in jeopardy. Aisha learns to survive, navigate life at school and on the unforgiving streets of Roxbury while keeping her eyes on the prize.

Thato Mwosa is an award-winning illustrator, screenwriter and filmmaker. Thato won the coveted “Emerging Filmmaker Award” at the 2005 Roxbury Film Festival. Since then, her films have screened at multiple  film festivals and have been broadcast nationally and internationally.   Memoirs of a Snitch is Thato’s first narrative feature. The production of the film started August of 2019 and the film will be completed August of 2020. Thato currently teaches TV, Film and Documentary Filmmaking at Brookline High School in Brookline, MA.

Thato graduated with a dual degree in TV/Film Production and Marketing/Advertising Communications from Emerson College in 2001. Additionally, Thato has an MFA in Writing for Stage and Screen from Lesley University. In early 2019, Thato was a finalist for the Mass Cultural Art Fellowship in the Dramatic Writing category.  Thato serves on the boards of Boston local television station, Boston Neighborhood Network and Women in Film New England.

Kioko Mwosa has supported and partnered with his wife Thato  through her many production ventures including several documentaries and short films. Memoirs of a Snitch is their biggest and most ambitious production yet.

Boston native, Jessica is an award-winning filmmaker whose films have been screened across the country.  She has worked with various film organizations including ITVS. Currently, she serves as the Distribution Manager at Documentary Educational Resources. Jessica graduated from Columbia College in Chicago with a degree in Film Producing and Casting. In 2019, Jessica won the New England Film Star award for her web-series Black Women Shine, which highlights the achievement of black women in Boston. The series is currently in production.

Cindy is a freelance multimedia producer who helps organizations and businesses to reach their audience using media and video across multiple platforms. Previously, she had worked for companies like Biogen, CBS Boston, Tuli-Art, RGB Enterprise, Step Forward To A Better You-Conference, Infocus-Entertainment among others. Currently, Cindy works as a multimedia teacher in Boston Public Schools . Cindy graduated  with a degree in Journailism from Emerson College.

Meet phenomenal actress Khai Avery Tyler who plays Aisha Johnson in Memoirs of a Snitch. Khai is a Boston born actor of the Caribbean and African American descent. She has a BA in theater studies from Ithaca College and has a passion for acting and writing for film and television.

Meet Carolina Soto, a Dominican-American  actress who plays Marisa in Memoirs of a Snitch. This is her first feature film but she’s been acting on stage since the 7th grade. She is currently a freshman studying Theatre and Performance at Salem State College in MA .

Alexandra discovered her love for acting at an early age. She attended Boston Arts Academy to work on her performance skills. Alexandra has appeared in numerous short films and well as a national commercial. Memoirs of A Snitch is her first feature film.

Haitain-American Juliette plays the role of Rudy. Juliette was raised in the Brookline area. She has played in various independent theatre productions around the Boston area. This is Juliette’s first feature film.

Meet Taylor Phillips who plays the role of Tonya in Memoirs of a Snitch. This is Taylor’s first role as an actress and she is already rocking it. Taylor knows how to get into character. She brings positive energy to the set.

Meet Juvan Elisma, an outgoing, fun-loving Haitian-American who plays Kevon Johnson in the film. Juvan has been building up his resume starring in a few independent films, booking commercials and taking up with his training in the last year. Juvan is grateful to be working with a talented cast and crew.

Meet Alexia Etienne​ who plays the part of Evelyn, the mother of Aisha in “Memoires of a Snitch.”  Her acting career started in her home country of Dominica, where she participated in community theatre.  Her first film acting role was in a BBC TV series, “The Orchid House,” filmed in Dominica.  In the United States, Evelyn is a full-time teacher and a part-time theater director. Despite her active roles, she has made time for the stage. Most recently, she performed in the Ghost of Christmas Past at the Canton Community Theater in Canton, MA.  Her passion for acting has pushed her to sharpen her craft through training in Massachusetts, New York, and California.

Meet Kim Tavares who plays Ms. Jones in Memoirs of a Snitch. This is Kim’s first lead role in a feature film. She has acted in short films and some commercials. Kim has done some background work on several television shows and movies. She is a singer/songwriter and has been a Boston Police Officer for 18 years.  Kim said “It was fun playing Ms.Jones. I immediately connected with her character. She’s a little stern, but very understanding, caring and loving towards her students.”

John Oluwole ADEkoje is an award-winning filmmaker and playwright. He is the national award-winner of The Kennedy Center's ACTF Lorraine Hansberry Playwriting Award as well as a recipient of The Roxbury International Film Festival's Emerging local Filmmaker award.  John's first feature film, Knock Around Kids, won him many awards and accolades.  John was the Cinematographer for the TV Shows, The Halls and Red Monster. He is a part of Beyond Measure Productions. John is a graduate of Humboldt State University where he earned a MFA in Dramatic Writing and a MA in Film Production.

Wesley is a cinematographer and gaffer who has worked on several feature documentaries and films. He has an educational background in animation. Wesley manages his company, FixitPost, a full-service digital media company specializing in branded video content.

Adam has been working in Boston as an audio engineer and sound mixer since 2012. Over the years, Adam has worked with a diverse clientele, ranging from Grammy award winning bands such as Imagine Dragons, to award winning video games such as BioShock Infinite, to Super Bowl champion Tom Brady. Adam is currently working in the sound department of Castle Rock Season 2, which is shooting in Devens, MA.

Chris Wan is a jack of all trades when it comes to all things video. He is a cinematographer, editor, colorist, and a camera operator. He has worked in various student productions as a cinematographer. Chris is currently a sophomore at Emerson College focusing on Film Production. He also works at Apple part-time.

Anto's background in psychophysical theater have led them to interweave their exploration in experimental narrative and documentary filmmaking with performance.
In 2017, Anto received a Flaherty Seminar Curatorial Fellowship thanks to Ford Foundation. Anto is one of the founder members of the Boston Film Collective AgX where they develop personal work, lead production workshops and have a role programing screenings to promote alternative practices in filmmaking.

Kevin Bernandez is an award-winning filmmaker who travels globally doing videos for various prestigious clients. He is also a skilled drone operator and owner. His skills include editing and cinematography. He runs his own production company called SELCOUTH SZN Productions.  Kevin graduated from Fitchburg State University with a degree in Film and Video.

Alexia Jay is a Boston based, freelance Hair and Makeup Artist with more than 5 years of experience. Alexia decided to combine her love for Beauty and Art by specializing in Fashion Editorial Hair and Makeup. She has had the opportunity to work with celebrities, designers, musicians, bloggers, weddings, photoshoots, music videos, film and maintains her own local clientele. Alexia graduated from Empire Beauty School and Boston Arts Academy.

U-Meleni Mhlaba-Adebo is a Zimbabwean American poet, author, actress, singer and educator who has performed internationally in Zimbabwe, South Africa, Nigeria, Portugal and Ireland. Her book Soul Psalms, a collection of poems is available worldwide. As a global citizen, world traveler, and multi-talented artist U-Meleni through her company Urban Thriftologee   she brings a global eclectic sensibility and holistic approach to the art of  styling & fashion.She is passionate about sustainable fashion, an expert Thriftologist previous style work included her “ Fire” upcycled fashion collection part of  Boston’s  Green Fest: Elements Eco-Fashion Show in 2014 , personal styling high profile clients  and style collaborations with GoodWill Boston. Memoirs of a Snitch is her first feature film

Bandie graduated From Johnson & Wales University in Providence, RI. She has worked in diverse fields such as Hospitality, Architecture, Logistics and the Postal Industry where she gained extensive experience in Marketing and Client Relations. Bandie is an avid writer, she has a collection of short stories. Her passion for theater and motion pictures combined with her talent in the creative arts attracted her to this project.

Sign up to get movie news and email notifications on special screening events.

@Memoirs of a Snitch

Memoirs of a Snitch